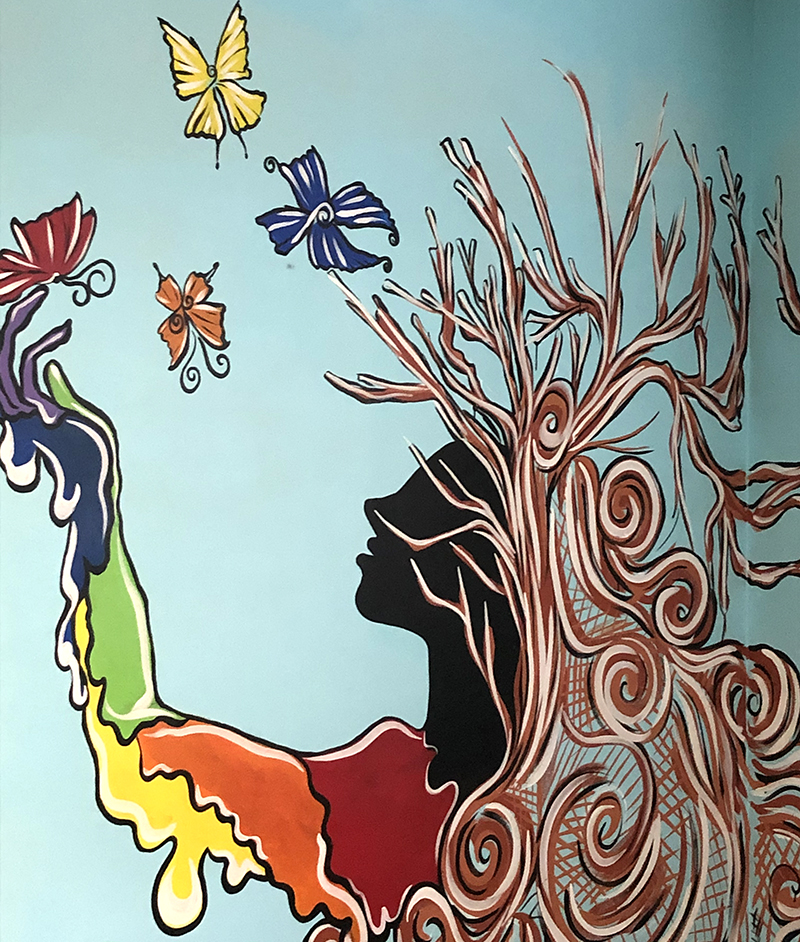 I’ve been sitting in contemplation this past week and praying a lot. A stirring in me to do something, in light of the injustices raging in this country, has gripped me. I have found that I’ve been both grief-stricken and angry, like so many others, and perhaps like so many others, as my mind has raced from one possible thought and action to the next, I feel as if I am just jumping from side to side in a boat caught in tumultuous waters yelling, “The boat is tipping! What can I do? What can I do?” When all the while, if I just sit down in the middle and listen to the stillness under the waves, I might stop contributing to the tipping of the boat.

It can be paralyzing to feel all of this grief. If I keep it in my head, thinking and rethinking it, trying to get everything perfectly right before I say something or step forward in loving action, I just keep tipping the boat. I have chosen in the past to serve women and children, because if mothers and children can get the services they need to live and thrive in a hopeful existence perhaps there will be a better, more well world for all. In recent years, I’ve begun working within my church youth group, alongside The Center in Baltimore, MD, to learn more about redlining and work in the communities affected by this national travesty. I was ashamed to admit the first time I heard this term “redlining” that, while I’d heard the word before, I didn’t really know what it was. During the 1930s, the Federal Housing Administration furthered segregation efforts by refusing to give mortgages in neighborhoods of color. All this while the FHA was subsidizing mass building of white subdivisions with the requirement that none of the houses be sold to African-Americans (More can be learned in Terry Gross’s interview with Richard Rothstein, author of The Color of Law, A Forgotten History of How Our Government Segregated America). This past February, I returned to The Center in Baltimore, knowing there was so much the women running this important organization had to each me. As our group gathered to unite with them, they spread before us maps that showed the neighborhoods that had been red-lined, literal red lines that were drawn through the neighborhoods that lenders deemed unworthy to provide mortgages to. As the FHA made this decision to deem certain human life unworthy of decent living conditions and home ownership, churches and schools got the message and moved their services out of these neighborhoods, and along with these resources, businesses offering proper food and employment opportunities largely did not come. So these neighborhoods became food, education, and employment deserts. After the first set of maps had settled in, they provided us with a second set of transparent maps of modern day pockets of violent crime and gun deaths in Baltimore for us to lay atop the maps from the 1930s. They were the same neighborhoods. The revelation was heartbreaking and awakening. The thread of injustice so deeply woven in, how do we unravel it?

This understanding was ignited in me again as I listened to the recent On Being podcast episode with Resmaa Menakem, a therapist and trauma specialist, in which he spoke of the intergenerational trauma around race that is held in the body: “When we’re talking about trauma, when we’re talking about historical trauma, intergenerational trauma, persistent institutional trauma, and personal traumas — whether that be childhood, adolescence, or adulthood — those things, when they are left constricted, you begin to be shaped around the constriction. And it is wordless. Time decontextualizes trauma.” This trauma goes back as far as 14 generations, and it takes physical work, the discomfort that comes as we embody ourselves deeply and honestly. But it also takes work and conversation and discomfort in the outer world. He said of the question of what it means to be human right now, “I think what it means to be human is to realize that we’re ever-emerging and that that — that we are not machines. We are not flesh machines; we are not robots; we come from and are part of Creation, and that that cannot just be something we talk about when we go to a yoga retreat; that it has to be a lived, emergent ethos and that — one of my ancestors, Dr. King, talked about how, when people who love peace have to organize as well as people who love war. And for me, what that means is that it’s about work. It’s about action. It’s about doing. It’s about pausing. It’s about allowing — the reason why we want to heal the trauma of racialization is that it thwarts the emergence. So let’s not do that. Let’s condition and create cultures that will allow that emergence to reign supreme so that the intrinsic value can supersede the structural value.”

I agree with this wholeheartedly, but the question remains, how can I, and how can Jala best serve? Our mission at Jala continues:

But there is more and I know this. I will continue to learn and will look to have conversations to understand how I have been part of the problem. I will continue to show up where I can in my own community and the greater communities surrounding us.
How can we reach out to serve better? We want to know.
We will continue the work to serve local women and children. But we want to know, how can we hold our community within the embrace of love, bravely serving where we are needed? We’re listening, friends. Help us speak truth to this world because as much as ever, we pledge to continue our mission, and because we have faith that the light is bigger than the darkness, that there is more good than evil, and that the power to shine in this world is one that should never be ignored.
Current locations we are working to serve:
It’s not enough to talk about how to be a human on the yoga mat. It’s time, in the words of Laura Parrott Perry, “to give your pain purpose. Time to put work boots on it. Send it out into the world. Give it a job.”

Photo: This picture comes from a very important place, The Glenwood Life Center, an addiction clinic in Baltimore in which the women of The Center brought us to connect and work for a day.